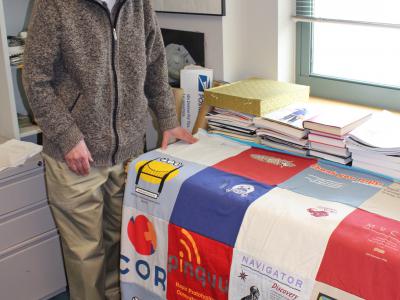 Look closer -- the sixteen squares of a quilt found in 3513 Newell-Simon Hall share a quarter-century of technological developments and the birth of the wearable computing industry.

The quilt, which belongs to Dan Siewiorek, Buhl University Professor of Electrical & Computer Engineering and Computer Science, is comprised of 12” squares cut from t-shirts from the course, “Rapid Prototyping of Computer Systems.”

First offered in 1994, the multidisciplinary course is available to human-computer interaction, electrical and computer engineering, computer science, and design students at Carnegie Mellon. The spring semester course culminates in a functional prototype with five to seven thousand engineering hours per system.

Each year, one design student from the course is selected for the distinct honor of branding the project with a logo. The design is kept secret until the shirt is distributed during the final capstone presentation. After the presentation, the group celebrates the end of the semester with an ice cream social.

With more than 25 years’ worth of shirts piling up on his office chair, Siewiorek’s daughter, stepped in with a solution. Nora Siewiorek, associate director of the Energy Science, Technology and Policy program at CMU, found a place that could make them into a quilt.

As it turned out, he had enough shirts for three quilts. One now drapes on a bookshelf in his office; the other two belong to his daughters.

When asked if he had a favorite project, Siewiorek smiled as he shared anecdotes from several squares.

“Well, Navigator was where it all started in 1994 -- the first project,” Siewiorek said, as he pointed to a grey square in the center of the quilt.

The wearable navigation assistant was bulky by today’s standards, featuring a heavy computer in a fanny pack and a cell phone in the straps of a harness. It featured a global positioning system, a 200-word vocabulary for speech recognition, telecommunications and a head-worn display for output.

To put things into perspective of the early 1990s, specs for the Navigator included goals of a two hour battery life, a weight of less than ten pounds, and a cost of less than $4500 per unit.

Siewiorek pointed to another square, a white one labeled COR in large, blue letters.

Cor, the Latin word for heart, was a wearable system designed for congestive heart failure patients to use after their discharge from the hospital. It measured vital signs, symptoms of congestive heart failure, sodium intake, activity level, and sleep patterns. Sensors communicated the information to a cell phone via Bluetooth or WiFi, and data was stored in databases in the Cloud. The patient, their caregiver, and physicians could access the data through customized dashboards to ensure the patient was following hospital discharge plans. At this point in time, the Apple Watch would still not be released for more than a year.

In 2015, the class worked on expanding eye gaze technology for a project with the Live Like Lou foundation, a non-profit founded by Neil Alexander and his wife after Neil was diagnosed with ALS. Students designed computer applications to extend the independence of individuals living with ALS, and explored ways to use eye gaze for communication with caregivers and control of electronics, like clicking a mouse and scrolling.

Other years, students built systems for the inspection and maintenance of a variety of things, including the dirty underside of Pittsburgh bridges (MIA in 1997), nuclear submarines (Electric Boat in 1997), F-16s (TIA-P in 1996), and airport people movers (Ad Tranz in 1995).

“Students were actually volunteering to go to the airport in the middle of the night,” Siewiorek reminisced about the Ad Tranz project. “It takes two hours for the motors to cool down, so they shut one down for us at midnight, and at 2:00 a.m. we got to crawl under the people movers at the Pittsburgh International Airport.”

Asim Smailagic, research professor at the Engineering Research Accelerator in the College of Engineering, has co-taught the Rapid Prototyping course with Siewiorek from its inception. Over time, a methodology emerged, and this User-Centered Interdisciplinary Concurrent System Design Methodology (UICSM) has been used to create more than three dozen computer systems to date. Three of the systems received international design awards.

Siewiorek has been a part of the wearable industry from the very beginning, even helping to define it as founding chairman of the IEEE Technical Committee on Wearable Information Systems. He helped it to transition from heavy backpack units to the lighter wearables of today.

At the end of this semester, another t-shirt will be added to the pile on Siewiorek’s chair with the culmination of the EmBrace project, serving scoliosis patients. It might be time for Siewiorek to start thinking about quilt number four.