CHI Preview: Researchers From HCII Believe Difficulty Can Be Overrated in Games. 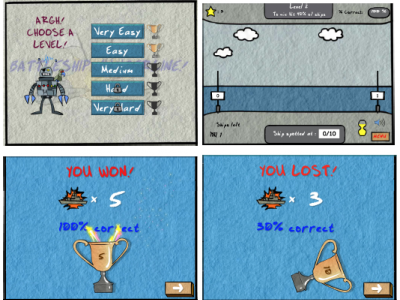 Like the fickle Goldilocks, game players are said to seek a game experience that is not too hard and not too easy, but just challenging enough. Or at least, that has been the general assumption. It is easy to imagine that a game can be too difficult for a user to enjoy. But can a game be too easy to enjoy? Researchers from the Human-Computer Interaction Institute developed a study to test the benefits of difficulty levels in a game environment.

"Can games be too easy, or too boring?" they asked.

Their paper, "Is Difficulty Overrated? The Effects of Choice, Novelty and Suspense on Intrinsic Motivation in Educational Games," is being presented this week at the ACM CHI 2017 Conference on Human Factors in Computing Systems in Denver. HCII Ph.D. alumnus Derek Lomas, now a postdoctoral fellow at UCSD, professors Ken Koedinger and Jodi Forlizzi, and contributing authors Normal Patel, Sharan Shodhan, Nikhil Poonwala received an Honorable Mention Award for this paper.

The authors found in previous research that players almost always preferred the easiest versions of the many game variations they tested. In this paper, they hypothesized that it is not the difficulty of a game that determines its intrinsic motivation, but that more specific design factors drive motivation. They tested three different factors associated with difficulty: player choice of difficulty, novelty and suspense.

Their first study was designed to test how choice of difficulty affects engagement. In this study, users were assigned to one of four conditions. Users either had the ability to choose their difficulty, choose an arbitrary level, or they were randomly placed into a labeled difficulty level or an arbitrary level.

The results from this study showed that the ability to choose a difficulty level did not increase motivation for moderately difficult levels as assumed. Rather, it produced the expected inverted-U shape by depressing motivation on the easy and hard levels. When users understand they are playing an easy level or a very hard level, they are less motivated to play.

Next researchers tested the affect of novelty on game motivation. In this study, users were assigned to levels with different frequencies of change. One game may have a 2-item length, while others changed every 20 items to mimic new features as users pass into new "game levels." Lomas and team found that moderate novelty or moderate frequency of change maximize player engagement in this experiment.

Suspense of a Close Game

Finally, researchers deployed a third test to test suspense of a close game. In it, the researchers added design elements to signify a win or a loss and a scorecard with the final tally. When a player won, a trophy with fireworks displayed. When a player lost, the trophy was knocked over. From this study, researchers found that players who barely won were the most motivated to continue to play.

In all three experiments for choice, novelty and suspense, the data resulted in an inverted-U shaped curve. The authors believe that, "In our three experiments, these three factors [choice, novelty, suspense] appear to be independent from difficulty, suggesting that some of the purported motivational benefits of difficulty may be conflated with other commonly associated factors."

The implication, they explain, is moving further from the idea that difficulty should drive motivation, but a combination of novelty, suspense and difficulty can drive intrinsic motivation. "Our evidence implies that early game experiences should minimize difficulty and provide a moderate degree of novelty," they explain.

Read the complete paper here for an in depth review of the studies and their results.