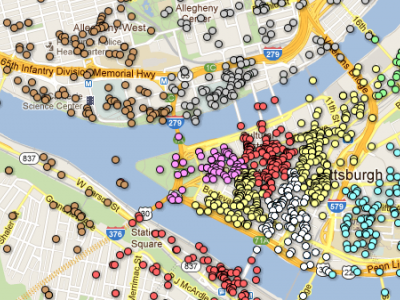 Location data is collected everywhere. Social media posts, Bluetooth or WiFi connections, ATM or credit card transactions, and many more activities generate data about where people are and what they are doing.

Companies value this data and use it in all sorts of ways. But 10 years ago, researchers in Carnegie Mellon University's School of Computer Science were among the first to demonstrate how analyzing public, anonymized location data at scale could provide unique insights into the dynamics of cities.

CMU's Livehoods project redefined how people looked at location data and at their cities and neighborhoods. Lauded when it was published in 2012 and still highly relevant today, the work recently received the Test of Time Award from the International Conference on Web and Social Media (ICWSM) — the same conference that gave the team a best paper award when they first presented their findings.

"We basically started this space," said Norman Sadeh, a professor in the Institute for Software Research and head of the Livehoods project. "This research was about investigating what we could learn from this data if we mined and managed it correctly. We were the first to show how this data was a direct reflection of how people perceive cities, neighborhoods and venues, and how these mental maps are reflected in their behaviors."

Sadeh and his team — Jason Hong, a professor in the Human-Computer Interaction Institute; Justin Cranshaw, a then-Ph.D. student in CMU's Societal Computing program; and Raz Schwartz, a visiting scholar at CMU from Bar-Ilan University in Israel  — analyzed 18 million public tweets embedded with location data from cities like New York, San Francisco and Pittsburgh. The data was anonymized and only public places, like restaurants, shops and parks, were used. Private residences were intentionally omitted.

The team developed an algorithm that mapped the data to show how people interacted with their cities. The algorithm revealed locations frequented by clusters of people and showed other places those people were likely to go. The team termed the resulting neighborhood-like geographic areas Livehoods. These Livehoods sometimes coincided with existing neighborhoods, but more often crossed over the borders or encapsulated a subsection of existing neighborhoods.

"Back when Livehoods was first published, there was a trend of papers looking at using social media to understand different aspects of society," Hong said. "The innovation with Livehoods was that geotagged social media could also be used to understand cities in ways not done before. It opened a new line of research that many people are still investigating today."

To confirm the Livehoods identified by the research, the researchers interviewed people living there. They found the unifying connections uncovered through their analysis held true when talking to residents.

"So much of city life is best captured in a folk knowledge that is natural to residents but difficult for outsiders to grasp. Neighborhoods are a great example of this. No one really knows the ground truth of where one neighborhood starts and another ends," said Cranshaw, now the co-founder and chief product officer at Flowdex and an entrepreneur in residence at the Allen Institute for AI in Seattle. "To me, Livehoods is about the idea that, for the first time, the folk knowledge as the root of city life can be made tangible by public data and computational analysis."

The Livehoods project attracted a great deal of attention after it was published. Urban planners, real estate developers, retail and restaurant chains, financial and marketing companies were among the groups that sought to understand the implications of the team's work. One such company, PNC Bank, worked closely with Sadeh to analyze the flow of people in different urban areas to help the bank determine where to place new ATMs and branches.

Early results also informed urban planning efforts in several cities. The maps could identify urban areas lacking needed resources such as grocery stores in so-called food deserts. For instance, the original Livehoods project showed that many people from surrounding areas went to a grocery store located in Pittsburgh's South Side neighborhood. Looking at other venues these same people often frequented showed that most of them were coming from areas of the city that lacked a grocery store.

"There is a ton of room to do good," Sadeh said. "This type of analysis can identify areas that are underserved, assist with public health issues and much more."

The team's original paper can be downloaded on the Livehoods website.