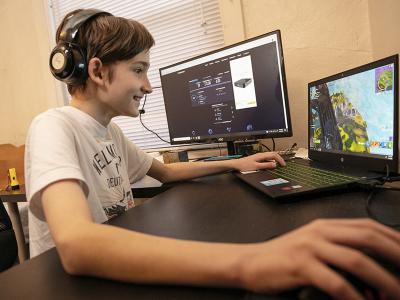 With many stuck in their homes as cities around the world try to reduce transmission of COVID-19, people are turning to games as a way to communicate, create a sense of community in the virtual world, and stave off boredom.

They’re also finding ways to transition their favorite face-to-face tabletop games into online formats so that they can continue playing them.

Chris Klug, associate teaching professor in Carnegie Mellon University’s Entertainment Technology Center, said online game companies are looking at the situation as a real opportunity. If there is a silver lining to COVID-19, online and tabletop game developers might be the beneficiaries.

"They need their consumers to be in front of their computers, and many people are doing exactly that," said Klug, an entertainment industry veteran with 25 years of experience working in video games. "Every person I know working at a game company is looking at this as a way to leverage what they already do."

Klug expects the increased numbers of people at home combined with people’s need for human interaction will amplify the demand for computer and console games that revolve around a multiplayer experience. Klug also is seeing a shift with traditionally in-person, tabletop games: More people are asking for ways to play games online that they normally play in person.

"This came during a renaissance of tabletop, board and live-action role playing games," Hammer said. "This space has never been more exciting than it is right now. There are new business models and incredible design innovation, including taking these face-to-face games online."

People want to be entertained, but they also are looking for human connection, Hammer said. She said research shows that the conversations people have when they play board games — even things as simple as explaining how many cards to draw — help form a sense of community and togetherness. People are finding ways to simulate that online because they value that.

"Livestreaming dance classes or game play creates a chance to have connectiveness," Hammer said. "People do feel co-present in these kinds of digital environments. We call it the distributed digital hearth: People are gathering around these beacons and having experiences that are real, and that is community forming."

But Hammer said the idea of obtaining most of your entertainment and socialization online isn’t new. Instead, new audiences are being introduced to it.

"For many people, including those who are disabled or immunocompromised, the internet has already been a source of connection," Hammer said. "Now you have a mass audience facing the same constraints. That might drive more investment into new technologies that could make experiences in this space more powerful."

New audiences have emerged in the past from technology disruptions and innovations. Klug said we last saw a shift of this magnitude with Facebook. Through the platform, gaming companies found a new demographic for their products.

"They were present but not important when game companies designed products," Klug said. "Zynga began producing really simple games, and they found that while the traditional gamer demographic wouldn’t touch them, the new demographic loved them."

Klug said it’s possible new demographics also will emerge from this shift. But, like many things with the current crisis, we will have to wait and see how that might turn out.