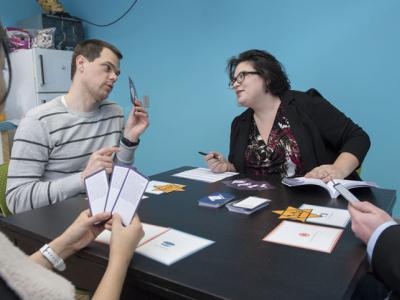 It is Feb. 27, 1943, in Berlin. Anneliese Edelman returns home with some fish, a rare treat for dinner.

Her husband, Max, should be back from his double shift at the factory, but their home is empty. For Anneliese, what was an ordinary day becomes the day her soulmate disappeared.

The game is in the final stages of development. The duo plans to add an augmented reality component, with a web app, music and sound developed by students at the ETC, which is housed in CMU’s Integrative Design, Arts and Technology (IDeATe) Network. The HCII is one of more than 2 dozen units from across the university that also participates in IDeATe.

Rosenstrasse is the first of a three-game series that Hammer and Turkington are developing highlighting historical protests led by women.