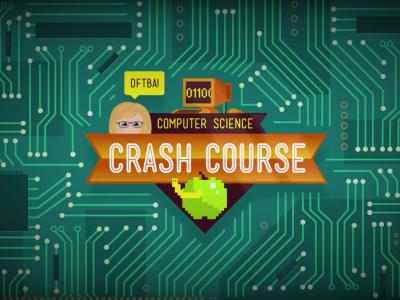 The first known use of the word, computer, was actually in reference to a job title, not a piece of technology. In spite of the past trend for men to more frequently take on the job of computer scientist, the first recognized computer programmer was a woman named Ada Lovelace. These are two facts out of hundreds shared in the new PBS Digital Studios Crash Course series on computer science, with weekly episodes posted to YouTube.

The series, which launched in February of 2017, is hosted by Carrie Anne Philbin, an award-winning computer science teacher and director of education for the Raspberry Pi Foundation. "Needless to say, I am passionate about this stuff," Philbin says emphatically in the introductory video to the series.

The writers behind the educational series are equally as passionate about communicating and demystifying computer science. They are Human-Computer Interaction Institute faculty members Amy Ogan and Chris Harrison. Amy Ogan is an educational technologist, co-director of the OH! Lab and assistant professor at the HCII. Her research looks at the next-generation of educational technologies and how it can support the social and cognitive aspects of learning. Chris Harrison is also an assistant professor in the HCII. He is the director of the Future Interface Lab where he and his students develop novel sensing and interface technologies.

A Crash Course series dedicated to computer science, both its history and practice, was born in an unlikely place: the World Economic Forum in Davos, Switzerland.

"We met John Green at the World Economic Forum last year, and Chris pitched him the idea of Crash Course Computer Science " explained Ogan. "We both really wanted the opportunity to get a broader perspective out to a wide audience on computer science as a field, and in particular, be able to speak to all the human-centered computing topics that we care so much about here!"

Green, author of award-winning books The Fault in Our Stars and Paper Towns, launched the first Crash Course video in 2012 with his brother. Today, the Crash Course series includes topics ranging from astronomy to history and has received more than 600 million video views.