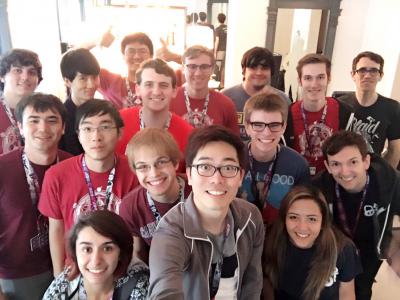 "The win represents the strength of the team and CMU's dominance in cyber security."

The Carnegie Mellon University cybersecurity team made history at the annual Defcon convention this year in Las Vegas. The Plaid Parliament of Pwning became the first team to win four "World Series of Hacking" titles in a row, giving the PPP more wins than any other team in Defcon's history.

The "Capture the Flag" style competition took place over three days and included 15 teams from over 10 countries. Teams were tasked with protecting their own servers from attacks while attempting to breach the servers of competing teams to grab virtual "flags."

''More now than ever, the skills used in this competition are becoming more relevant because cybersecurity is impacting all of our lives,'' says Tim Becker, a team captain and fourth-year computer science student. “It’s important that people have a place like this to hone their skills. The more we practice, the better prepared we’ll be in the real world in dealing with actual cyberattacks.''

"Cybersecurity isn't something that can be magically solved by teams of security wizards. It requires cooperation between security specialists, human-resource people, IT managers and professionals, programmers and so on," he says.

Cybersecurity awareness must extend to everyone who uses a computer or computing technology in some way, he continues. That's the only way to stay secure.

"The PPP is one of the only teams to have a very strong identity as a school team."

As the PPP establishes its dominance in the cybersecurity space, Xiao highlights the team's school identity as a uniquely valuable attribute.

"PPP is one of the only teams to have a very strong identity as a school team," Xiao says. "Although many members have since graduated, the shared identity of being all (present or past) CMU students keeps our team highly cohesive and contributes to our ability to function."

Carnegie Mellon University's alumni network is a robust and close-knit community, and it is the university's shared identity that Xiao believes is a valuable part of their team culture. Xiao adds that the PPP was the only American team in this year's top 5 and that they felt stiff competition from other countries' teams.

"These countries are massively stepping up investments and infrastructure in cybersecurity, and I think the U.S. needs to do so as well to void falling behind," he says.