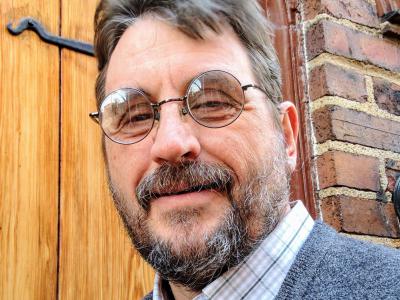 Scott Hudson, a professor in the Human-Computer Interaction Institute (HCII), is this year's winner of the Lifetime Achievement Award in Research presented by the Association for Computing Machinery's Special Interest Group in Computer-Human Interaction (SIGCHI).

The award recognizes the best, most fundamental and influential research contributions accomplished over a lifetime of innovation and leadership in the field of human-computer interaction.

Hudson, who received the SIGCHI Lifetime Service Award in 2017, is best known for creating tools and enabling technologies necessary for building interactive systems. This work began with software tools for implementing graphical user interfaces and later expanded to include the use of sensors in interactive devices and the application of machine learning techniques in HCI.

"Scott has always been known for his inventiveness, creating, for example, a pixelated display implemented with air bubbles in water and a 3D printer which prints in needle felted yarn," SIGCHI noted in its award announcement.

Hudson earned his Ph.D. in computer science at the University of Colorado. He joined the HCII in 1997 after stints at the University of Arizona and Georgia Institute of Technology. He founded the HCII's Ph.D. program and has served on program committees for a number of leading HCI conferences. He was elected to the CHI Academy in 2006.