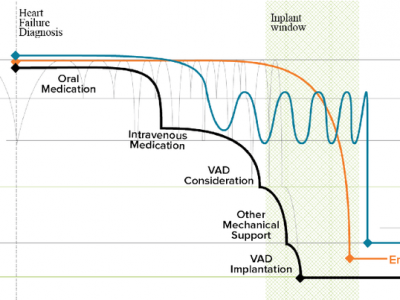 Heart patients who have reached end-stage heart failure may have a pump surgically inserted to help blood flow to the rest of the body. This mechanical implant is called a ventricular assist device (VAD), and it can prolong and improve patients' lives. Though physicians have been performing this surgery for years, the patient outcomes are not as predictable as would be expected. While some patients are finally able to return to their normal lifestyle post-surgery, other patients do not live long after receiving this technology. Still more patients never become candidates, despite their viability for the device.

Seeking to improve the outcomes of a VAD implant, Biomedical Engineering Professor James Antacki, an artificial organ researcher, assembled a team of cardiology researchers and partnered with John Zimmerman, an associate professor in the Human-Computer Interaction Institute. Their goal was to develop an intelligent tool that data mines healthcare outcomes to help clinicians decide which patients may be the best candidates for a VAD.

At first glance, human-computer interaction seems an unlikely specialty to bring into a biomedical engineering research project. Zimmerman is well known for his research on designing intelligent technology for families and homes, not for researching successful outcomes from artificial organ implants. However Antacki, the principal investigator for the project, did not need another VAD expert. He recognized that for the project to succeed, they needed a researcher who understood how to make intelligent systems that people actually want to use. In this case, a decision support tool (DST) that transplant cardiologists would actually refer to when approving patients for surgery. That person was John Zimmerman.

In theory, medicine is an ideal field to benefit from machine intelligence. Digital healthcare records provide more and more data to support accurate predictions. However, these tools rarely survive in clinical use. DSTs that have positive outcomes in researchers’ labs, almost always fail to provide any benefit when moved to a clinic. Research on the clinical failure of DST’s notes that a lack of human-computer interaction has led to a host of tools that clinicians find little value in and subsequently don’t use.

"It's not that people don't find human-computer interaction valuable," said Zimmerman. "It's because HCI does not get integrated into these systems when they are designed."

Complaints of poor design in healthcare products are far from uncommon. The EpiPen is an often-cited example. To administer the medicine, the pen's cap is removed, but the needle protrudes from the opposite side of the pen, causing accidental injections. When building a DST, designers wrongly assume that clinicians have both the time and desire to consult with a separate computer system when treating a patient.

They also assume that patients have no discomfort seeing their doctor refer to a computer for recommendations on their care. The designs ignore critical contextual factors, such as the fact that most attending physicians spend little time in front of a computer or the increase of hand washing required from frequent interactions with a non-sterile keyboard. In other cases, the DST solutions offered little or no new information to clinicians.

"I realized that in many cases, a tool was only telling doctors what they already know," Zimmerman said. "Physicians don't need an intelligent tool to tell them a textbook case is a textbook case."

The cardiologists performing VAD implants, Zimmerman explained, are experts. They make care decisions from years' or decades' worth of training and experience. They also factor information into their decision that an intelligent computer system won't always know, like the strength of a patient's social support - an important consideration before recommending surgery.

Yet, that hasn't stopped people from creating tools that are merely replicating what a cardiologist already knows. What these physicians needed, Zimmerman and Antacki theorized, was a system that could signal when a cardiologists' insights from experience were contradicted by a statistical analysis of previous patient outcomes.

"What we want to do, " Zimmerman explained, "is to combine the two. We want to pair what a computer can see with what a physician already knows."

Namely, Zimmerman wants to combine the best of both human and machine intelligence to improve medical care.

To do this, Zimmerman and HCII Ph.D. student Qian Yang began by conducting fieldwork at three different VAD implant centers and observed how implant decisions are made. Through this research, they noted that patients followed several different care journeys from the initial heart failure diagnosis to the VAD coordination team's transplant decision.

When patients are first diagnosed with heart failure, they work with their own cardiologist who generally treats the condition with a combination of lifestyle changes and medications. As patients become increasingly less responsive to medications, their cardiologist may refer them to a medical center for heart transplants and VAD implants. Clinicians at the center collectively agree when a patient is eligible for the surgery.  If a patient is too healthy or too sick to undergo surgery, the VAD decision team will not proceed with a surgical recommendation. Even after a patient is cleared for the VAD implant, it is still a very serious decision for the patient and their family to make. Living with a VAD requires serious lifestyle changes like no smoking or drinking, and possibly never driving or having sex again.

Zimmerman and his team also observed that many patients arrived directly from emergency rooms and who had little to no history of heart failure treatment to guide an implant decision. Though a long medical history was not always enough to ensure a VAD when one was needed. Cardiologists often waited too long to recommend patients, who arrived at the transplant center too sick to benefit from an implant.

"The biggest insight from the fieldwork was that the target audience for our decision support system (the cardiologists that do the implants) was not the right audience," explained Zimmerman.

The team's work uncovered this idea of an implant window, an ideal timeframe and/or certain conditions of the heart, which contributes to a patient's eligibility for the surgery. Many patients referrals arrived too early or too late, missing the window.

"We should be focusing on the cardiologists that refer their patients to an implant center," said Zimmerman. "And we should think about making a system that aids these clinicians in making sure a patient does not get referred too late for an implant to happen."

While this discovery was a change in the direction of the project, it was not altogether a surprise. Spending time in what Zimmerman calls the "discovery phase" is just as much about researching the right question or problem as it is researching a solution.

"We do a type of research here that isn't done almost anywhere else in the world," said Zimmerman. "Design research is always about changing the goal of the project to a better goal."

In the case of improving outcomes for VAD patients with end-stage heart failure, a better goal would be helping upstream cardiologists refer patients in time for an implant. Implant teams would benefit more from getting patients they can help and having a tool that tells them these patients are too sick to treat. And therein lies the true power of research through design. Where standard research techniques may focus on optimizing towards the original goal of a project, a design research approach uses that original goal as a place to start the research. And that is not necessarily where it will end.

"We are researching possible futures; where we should go as much as where we shouldn't," says Zimmerman of his approach to research. In the case of VAD patients, where to go includes another round of field research with upstream cardiologists, as well as augmenting the original intelligent system to become more useful for the implant clinicians.