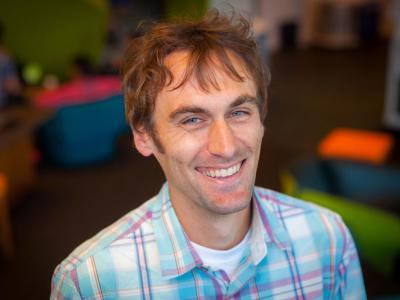 Carnegie Mellon University is a place where the future is imagined and re-designed constantly. Roads with self-driving cars, rooms powered by super sensors, and computing directly on your skin are just a few version of the future conceived of by Carnegie Mellon minds. While the future of computing continues to expand, Associate Professor Jeffrey Bigham is working to ensure that the future we create is accessible for all people, not just those who can see or hear or interact with devices in a certain way.

In recognition of his work advancing accessibility research, the ACM named Bigham an ACM Future Leader of Computer Science. The ACM Future of Computing Academy (ACM-FCA) was created with the intent to foster the next generation of computer scientists.

Bigham describes his research as exploring clever combinations of crowds and computation to build truly intelligent systems, with a focus on systems supporting people with disabilities.

"Computing is a part of nearly every human activity," said Bigham when discussing his desire to work closer with ACM. "I think conveying the importance and scope of impact of computing to the public is becoming important as computing directly impacts the lives of more and more people."

Anticipating a need to provide intentional support to the next generation of computer scientists, the ACM created the Future of Computing Academy with a diverse group of researchers to collectively plan for the challenges and opportunities of the future.

One of these challenges is designing accessibility into not only computer interactions, but into the way we teach and produce research, explained Bigham.

"Unnecessary inaccessibility pervades our research practice – our courses, our presentations and conference venues."

According to Bigham, the challenges facing computer science aren't just about increasing accessibility in future technology, but in having the political will to do the things we know how to do today. He offers the pervasive use of PDFs as an example.

"We know how to make documents accessible to people with disabilities, but the PDF format is especially tricky to make accessible correctly," he said. Despite it's inaccessibility, the PDF remains the format of choice for researchers.

Bigham is headed to San Francisco in June for the inaugural meeting of the ACM Future of Computing Academy meeting.