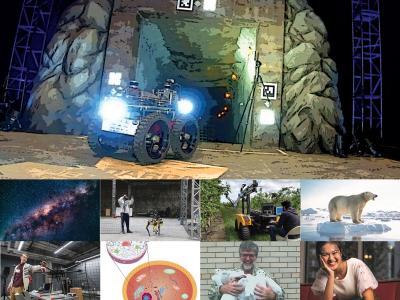 Researchers sorted through 38 million tweets from more than 7 million users to better understand how climate change disinformation forms and spreads. Meeting a deaf woman while volunteering at a homeless shelter inspired a student to advocate for including sign language in language technology research. And subterranean search-and-rescue efforts could get a boost from the lessons of a fleet of robots and drones exploring the most remote corners of caves, tunnels and the underground world.

The latest issue of The Link, the magazine of Carnegie Mellon University's School of Computer Science, is now online and features these stories and more. The magazine highlights the work of faculty and students from across the school. Past issues are also available in the site's Archives.

Stories in this issue include:

Studying the Unknowable: Research into a decision-making algorithm that could help model the evolution of the universe.

Lessons Learned From the SubT Challenge: Team Explorer, led by Carnegie Mellon researchers and roboticists, competed in the DARPA Subterranean Challenge and came away with a massive knowledge base.

The Global Reach of CMU AI: School of Computer Science AI researchers will lead four National Science Foundation AI Institutes to solve some of the world's most complicated problems.

Heated Conversations and Cold Realities: How disinformation about climate change has its roots in conspiracy theories.

Letting Imagination Run Wild: CMU invites students from across campus to collaborate and explore AI with the opening of the JPMorgan Chase & Co. AI Maker Space.

The Higashi Algorithm: Machine learning offers a high-definition glimpse of how genomes organize in single cells, dictating the fate of a person's health.

Building The Robot Archive: A team of CMU University Libraries archivists and roboticists seek to collect and display the university's massive impact on the history of robotics, built from the remains of robots, prototypes, films and images.