In the Loop: Jessica Hammer 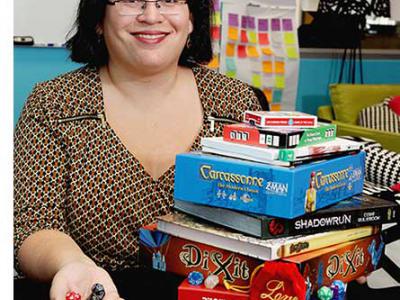 Jessica Hammer is an assistant professor at Carnegie Mellon University, with a joint appointment between the Human-Computer Interaction Institute and the Entertainment Technology Center. She is a graduate of Harvard, with a B.A. in computer science, and earned a master’s of professional studies degree in interactive telecommunications at New York University and a Ph.D. in cognitive studies in education at Columbia University.

What were your earliest gaming experiences?

I started designing games when I was 8 years old, planning birthday parties for everyone in the class. So I went to the library and got a book called “101 Party Games for Kids.” This book was my secret sauce. I would take the games in the book, and then modify them for each party.

Later on, I started babysitting and ran a youth group, and I designed games for those, but I didn't know it was a career path. I just thought it was just something you did when you were a babysitter.

How did you get into computer science?

I almost failed the course, and that made me mad. I said, “No! Computer science is not going to beat me!” I went back and took the next course in the sequence, and at some point, I fell in love. I realized that solving problems and making things was really satisfying.