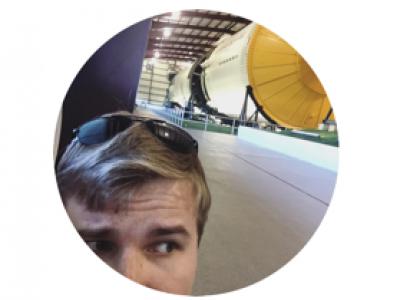 Dave Luetger is a 2013 graduate from the Master of Human-Computer Interaction (MHCI) at Carnegie Mellon University. While completing his undergraduate degree at the University of Illinois, he realized that both music (he was previously on course to major in music education) and sociology were the wrong career paths for him. Instead, a minor in informatics steered him towards a career in human-computer interaction.

What drew you to human-computer interaction?

Well, I knew I didn’t want to be a sociologist. I was sitting in class after I had realized this and happened to see a flyer for informatics. It was a new minor that they were spinning up, and the way that they were defining informatics was really interesting to me. They described it as technology with not just computers in general, but anything else.

So I decided to pursue that minor and became interested in human factors and also digital inequality. I had the chance to see firsthand what digital inequality can look like during my time tutoring senior citizens in computers. One population has less access to everything else because they are missing a specific skill set. This has a pretty big consequence. One person might know how to use the technology for a job and another person won’t. That really got me interested in a career that can address these deficiencies.

Why Carnegie Mellon University?
I had researched schools, so Carnegie Mellon was high on my list already. The point where I decided which program I wanted to accept was really at the open house.  All of the accepted students are invited to an open house in the spring, and I just realized that I want this. I felt very welcomed and that’s ultimately what made me make the decision. You could tell that the Human-Computer Interaction Institute really took care of their students.

When you came into the program, did you know what you wanted to do?

Not at all. The surest that I have ever felt about anything was getting the acceptance letter and deciding to go to Carnegie Mellon. I had no idea what I wanted to do with the degree, but it felt like I was on the right path. My decision really came together as I graduated and keep learning more and more about the field of HCI and UX.

Was there a class or tool that has helped you most in your career?

I could give a lot of answers to this. There wasn’t one class that I think has changed my career, but there are moments. I took an improvisation class as an elective course during MHCI. I think it’s something everyone should be encouraged to take. Improvising helps very practically because these are the skills you use most when you are actually interacting in industry and with clients. When you present to clients, when you communicate with vendors or coworkers, or when you pitch an idea to stakeholders, you can draw from practices in improvisation so the communication skills you learn are valuable.

I also took the required interaction design class, which was the first time that I really wondered if I could be a designer; the drawing-on-a-page designer. I was able to talk to my professor about this class, and he indicated that it was something that I could be capable of. So that was an aligning moment, and I’ve had different thoughts or perspectives since.

How would you describe the value of the program to you?

I think this is where I go off the rails a bit. For me, it was very much a, “You get out of it what you put into it,” kind of experience. I realized that for me, this degree was necessarily the right step. My biggest take away from MHCI is that it was the right thing for me to do. What it did for me is it taught me how much I didn’t know. There was the universe before MHCI and then the universe when I realized that UX was a thing. I learned that I only knew about 10% of what’s out there, and I’m really still learning today.

Also, I would say that the capstone project was another, “You get what you put into it,” experience for me. Our capstone gave me the confidence to come out of the program and know how to talk to clients, and know how to work on a team project, and have a good piece in my portfolio. That was valuable to me.

How would you help students today?

I have advice, but it might seem like the opposite. In the last two years, I feel like I have developed a healthy cynicism about what the real UX is. My advice is this: Not everyone is doing it, and it’s OK. What I mean by that is you shouldn't get too overwhelmed and feel like you have to do it all. Like you have to write a blog, or tweet all the time, or give keynotes. The most visible people in our industry are doing all of these things. I’m not saying don’t do them, but understand that, of course the people you see everywhere are the ones hosting meet-ups or giving keynote addresses. That doesn’t mean they are better practitioners than you. If you are interested in doing those things, then do them. But don’t do them because you think it’s a prerequisite. Keep networking, keep going to meet-ups, and keep doing the activities that interest you, but don’t feel that you have to do those things to be good. It took me some time to appreciate this, and I think sharing it with current students might give them some peace of mind.

Where are you now?

I am a User Experience Designer at NASA Ames Research Center, one of NASA’s field centers where we produce research and development in aeronautics and exploration technology. I remember seeing the NASA logo during a presentation at the spring open house, and it was a defining moment for me to think that a guy with a sociology background could now work with a company like this. It was a round-about path, but now I’m here. I really like what I do, and I like my team a lot. I get to work with a lot of other Carnegie Mellon graduates and some right from the HCII, which is great. We all seem to speak the same language.

Are you an alumnus or alumna from the Carnegie Mellon University Human-Computer Interaction Institute? We want to stay in contact! You can send us news about yourself, come to campus for a Q&A with students, or give an alumni interview. We want to share your news with other alumni, our students, faculty, and staff. You can get more alumni news from our LinkedIn alumni group as well.