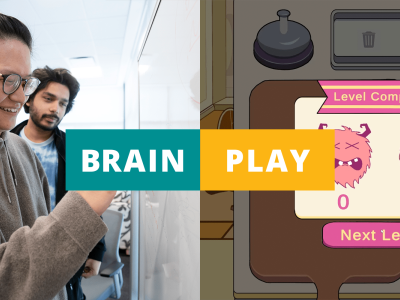 Jessica Hammer thinks the most important technology for making games is the brain.

"My games are designed to put the player into an altered state, so their brain becomes part of the system of play," said Hammer, the Thomas and Lydia Moran Associate Professor of Learning Science. "Play is not something that can be done to you. It's something that you actively do with your mind as well as your body."

When the brain is in an altered state of play, good things can happen. Hammer studies transformational games, which are games that change how players think, feel or behave. They can even aid in medical issues and help researchers better understand how the brain works.

"Games are great for getting patients to do arbitrary activities," Hammer said. "For example, rehab for neurological or neurophysiological issues requires patients to practice specific things repeatedly. Games can get them to look forward to doing that."

In Aphasia Games for Health, Hammer partnered with the University of Pittsburgh's William Evans and others to help patients suffering from aphasia, a disorder that affects how people communicate. They created a suite of free games people in the aphasia community could play with their friends, families and online communities.

"People with aphasia may need years of rehab, but not everyone has access to it," Hammer said. "Not being able to communicate is very isolating. There is a robust online community of patients and families that were already using games as a catalyst for social interaction. We wanted to make sure the games they were using had rehab benefits as well."

All games in Aphasia Games for Health can be played with just access to a printer or video conferencing, like Zoom. In one game, The Minister's Cat, players use a printable deck of cards as prompts to tell and remember stories. In Do You See What I See, four to 16 players identify interesting objects in other players' video chat backgrounds.

"If you're rural, if you're remote, if you don't have access to an in-person group, you can play these games with people online. It's a great excuse to connect with other people," Hammer said.

Hammer is teaming up with Barbara Shinn-Cunningham to bring neuroscientists and game designers together at BrainPlay, a conference being held at Carnegie Mellon from Nov. 30 to Dec. 2.

Co-organized by the Tianqiao and Chrissy Chen Institute (TCCI), the event will gather experts and newcomers from both fields, with a shared goal of fostering new collaborations. Yan Li, a senior program manager at TCCI, said the organization is thrilled to bring the fields together.

"Neuroscience is trending in the direction of using richer, more natural stimuli and less constrained behavior," Shinn-Cunningham said. "To get good data, past research often has been repetitive and dull, dividing tasks into brief 'trials' that constrain what happens. Acquiring information isn't fun or meaningful like it is in real life. One of the things game designers can teach us is how to make tasks fun, which can change how the brain functions."

In a representative experiment to study auditory neuroscience, for example, a subject may sit in a booth and click a button if they hear a sound. Shinn-Cunningham said those types of experiments have been the bread and butter for neuroscience research for a long time, but they do not resemble everyday life.

"When it comes to a higher order of cognitive processes, those simple tasks and reduced stimuli don't engage neural mechanisms in the same way ordinary experience does. Gameplay provides rewards to the brain, making something fun and engaging. It truly will allow us to understand things about how the brain operates in the real world," Shinn-Cunningham said.

Planning BrainPlay made Shinn-Cunningham and Hammer think carefully about how to bring their two communities together in a way that left room for people with all levels of expertise. They also wanted to be sure both groups benefited from collaboration.

"I was worried knowledge would flow one way — neuroscience to game design," Hammer said. "But that is not what happened. We have been learning that game design knowledge can influence the kind of research that neuroscientists think is feasible."

In the summer of 2022, Shinn-Cunningham and Hammer put together a group of students to create two proof-of-concept games that incorporate neuroscience research experiments. The games, called Alien Café and Wonderland will be showcased at the BrainPlay conference.

Rohit Sharma and Jinman (Valerie) Li, both master's students in CMU's Entertainment Technology Center, co-led the project. Both students had previous game design experience, but neither had worked with neuroscientists before.

"Working with our neuroscience partners made me question a lot of things I usually take for granted as a designer," Sharma said. "It helped me to think about why a player would remember a certain sound, why a player would be motivated to learn. We made our games better by understanding the neurological aspect, how players actually think about or perceive certain things."

"As a game designer, we usually think about how to make this game fun, how to make interesting mechanisms, but we don't always center the player," she said. "This project has changed how I approach game design."

Hammer and Shinn-Cunningham hope the BrainPlay conference will similarly inspire people from both fields.

"You can be a game designer or a neuroscientist and do great work with neuroscience and games. You can also stand in the middle and have a foot in both worlds. Those are all viable paths for making an impact in this area," Hammer said.