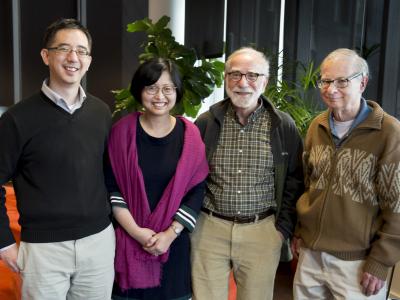 The sale of Wombat Security Technologies to Proofpoint Inc. for $225 million last year presented an opportunity for Jason Hong, one of Wombat's co-founders, to give back to the School of Computer Science and the Human-Computer Interaction Institute, where he has been a faculty member since 2004.

And he did so in a big way. Hong and his wife, Shelley Zhang, chose to endow not one, but two professorships for junior faculty — one named for Dan Siewiorek, the other for Robert Kraut, both prominent, longtime faculty members at CMU.

"We thought that honoring people who had mentored so many students and faculty — including me — was a good way to use some of the proceeds," Hong said. "Helping junior faculty members get their careers started is important to them and to the university. It's a win-win across the board."

Another motivation for Hong was that he had benefited from a faculty fellowship, which he later learned had been funded by Sara Kiesler, Hillman Chair Emerita of Computer Science and Human-Computer Interaction.

"Never in my wildest dreams did I think anyone would make such a donation in my honor," said Siewiorek, the Buhl University Professor of Electrical and Computer Engineering and Computer Science. "People who give back usually give back in their own name." When Hong announced the professorships at a faculty meeting, "I was floored," he recalled. "This was incredibly generous."

Siewiorek said he not only is flattered to be the namesake of one of the professorships, but also appreciates how important junior professorships are to the school for retaining talented faculty. Siewiorek was HCII director when he recruited Hong.

Hong, a professor in the HCII, heads the Computer-Human Interaction: Mobility, Privacy, Security (CHIMPS) research group, and is a leading researcher on privacy and security and on how smartphone data can be used to improve lives.

He co-founded Wombat 11 years ago with Lorrie Faith Cranor, the FORE Systems Professor of computer science and engineering and public policy; and Norman Sadeh, professor of computer science. The company initially leveraged their work on training employees to recognize email phishing attacks by sending them simulated phishing emails. Wombat later expanded its training modules to address issues related to the use of smartphones, USB drives, social networks and more.

By the time of its sale last year, the company was widely recognized as a leader in cybersecurity awareness training.

"Jason's generosity is an affirmation of the values of the HCI Institute: collaboration, support and mentorship," said Jodi Forlizzi, HCII director. "We are extremely honored to work with Jason and to receive this award."

Hong said teaching and performing research in the HCII has been personally and professionally rewarding.

"There's a lot of camaraderie here, a lot of collaboration," he said. "A lot of fun — and a lot of hard work, too."