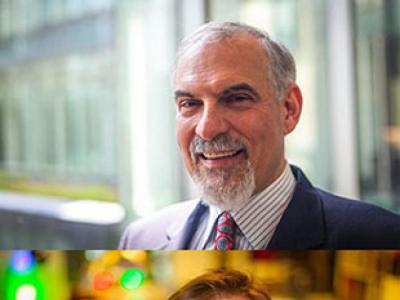 A recent Innovation column in the New York Times’ “Magazine” section posed the question “Who made that progress bar?” Part of the answer includes HCII Professor Brad Myers (top right).

The time was 1985 and Myers, then a grad student, presented a paper on the importance of “percent-done progress indicators.” He proposed that progress bars made computer users less anxious and more efficient. To prove it, he generated a capsule that filled from left to right — “like a giant thermometer from a charity drive, tipped on its side” — and asked 48 students to run computer searches with and without the bar. His findings? Eighty-six percent said they liked the bars. “People didn’t mind so much if it was inaccurate,” Myers said. “They still preferred the progress bar to not having anything at all.” His work led to coders and designers adding progress bars for situations where the program could only estimate how long things will take.

Assistant Professor Chris Harrison (bottom right) also appears in the story to comment on modern progress bars and how users perceive them.

Read the entire story on the New York Times website.