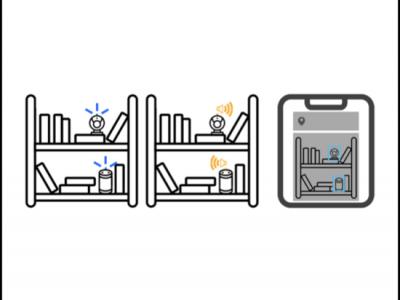 More than 1 in 10 Airbnb guests have found hidden cameras in their rooms, according to a survey of 2,000 people conducted last year. This isn’t unique to Airbnb; hidden cameras have been found in hotels and hostels all around the world. Some of these incidents have led to lawsuits.

As the Internet of Things (IoT) continues to boom, IoT devices such as cameras and microphones are getting smaller and blending in with their environment, making it harder to know when devices are around. This may lead some to wonder if, perhaps, more than 1 in 10 hotel guests have actually been in the presence of cameras.

“People really want to know the location of IoT devices in unfamiliar environments,” says CyLab’s Jason Hong, a professor in the Human-Computer Interaction Institute (HCII) in Carnegie Mellon’s School of Computer Science. “But we lack the effective approaches to do so.”

In a new study presented at this year’s ACM CHI conference, Hong and his co-authors explored various solutions to the hidden IoT device conundrum. First, they asked 226 people via survey about their privacy concerns about devices when traveling and their strategies and motivations in locating them.

Most of the people who said they searched for devices in their last stay said they typically did so manually, by walking around the room and searching with their hands and eyes.

“For this reason, we decided to explore the effectiveness of light and sound in helping people locate IoT devices around the room,” says Hong.

“Surprisingly, some of our participants said it was fun using visual and auditory cues to search for devices,” says Hong.

While this research is just in the early stages of developing prototypes for IoT locators, the researchers are optimistic it’s a step towards alleviating the hidden camera problem.

“Our hope is that the findings in this paper can help industry and policymakers in adopting the idea of locators for IoT devices,” says Hong. “This is a step towards addressing growing privacy concerns with the Internet of Things.”

Other authors on the study included: