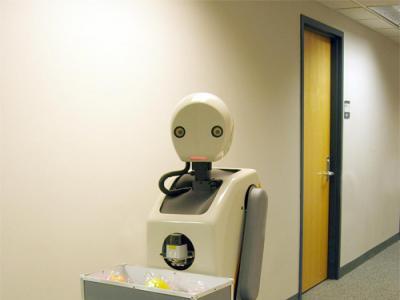 The Harvard Business Review's June cover story, "When Your Boss Wears Metal Pants," investigates the social constraints that have to be overcome before robots or other thinking machines can be accepted in the workplace. "How can you persuade your team to trust artificial intelligence? Or to accept a robot as a member — or even as a manager? If you replace that robot, will morale suffer?" the author asks. To answer those questions, he provides examples of research that expand our knowledge of how humans and these thinking machines can work together — including Carnegie Mellon's Snackbot.

"For instance, we seem to collaborate with robots more effectively when they make 'eye contact' with us, and we think they’re cuter and more humanoid when they tilt their heads to one side," the article says. "Researchers at Carnegie Mellon explored this idea with a four-and-a-half-foot-tall autonomous robot named Snackbot, which had wheels, arms, a male voice, and an LED mouth that could smile and frown. Snackbot’s job was to deliver snacks within an office, but it was explicitly designed to evoke an anthropomorphic response. As predicted, people in the office made conversation with it and treated it with kindness. Asked about their interactions with the robot, one participant said, 'Snackbot doesn't have feelings, but I wouldn't want to just take the snack and shut the door in its face.'"

Read the whole article in the Harvard Business Review, and learn more about Snackbot on its project webpage.