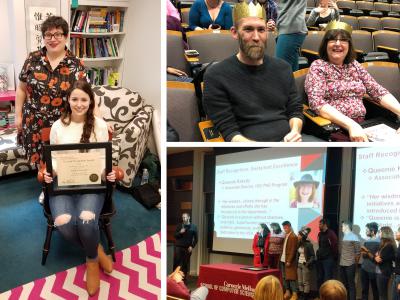 According to the Founders Day website, the event ”Is a time for sharing our collective efforts, recognizing the good work of faculty and staff, as well as looking towards the future of SCS.”

Staff can be nominated for six different categories of awards: Rookie of the Year, Sustained Excellence, Individual Dedication, Outstanding Staff, Citizenship, and Teamwork.

Two HCII staff members were nominated for two separate categories, and both received their respective awards. Diana Rotondo, administrative coordinator at the HCII, received the Rookie of the Year Award, and Queenie Kravitz, associate director of the HCI PhD Program, received the Sustained Excellence Award.

Rotondo joined the HCII in July of 2018, and has already made a positive impact in less than a year. Her anonymous nominator praised her supportive nature, excellent collaboration skills and eagerness to learn new things. “She clearly has positive relationships with her co-workers, and celebrates their successes right along with her own.” Jessica Hammer, Thomas And Lydia Moran Assistant Professor of Learning Science, joined Rotondo on stage for the award presentation.

Kravitz, winner of the Sustained Excellence Award, has been with the HCII since 2004, and with Carnegie Mellon University since 1993. She was nominated by a group of people from the HCII Ph.D. program, many of whom joined her on the stage during the award presentation. “Her wisdom...shines through in the initiatives and efforts she has introduced to the department.”

Congratulations to Diana, Queenie, and all 2019 award recipients and nominees!

If you missed the event, there is a recording of the ceremony on the SCS website. To watch the distribution of the two HCII staff awards, tune in from 55 minutes to 1:00.

This is the second year in a row that a staff member from the HCII has received an award on SCS Founders Day. In 2018, Ryan Ries, HCII business manager, received the Individual Dedication award.