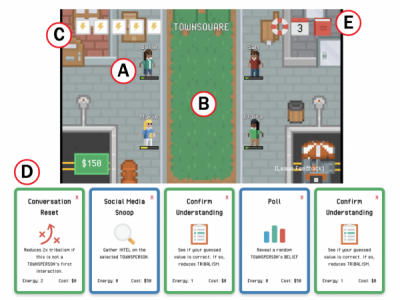 How can students learn to make their civil discourse more productive? One Carnegie Mellon University researcher proposes an AI-powered video game. The educational system targeted toward high schoolers adapts to students' specific values and can be used to measure — and in some cases reduce — the impact of bias.

"Activities like debate club often reinforce the objective of 'winning' conversations rather than fostering democratic goals. Social media further polarizes, reinforcing information bubbles, biases and tribalism. It makes it hard to move forward," said Nicholas Diana who recently earned his Ph.D. from the School of Computer Science's Human-Computer Interaction Institute. He added that productive civil discourse is a skill that needs to be taught, modeled and practiced just like any other core subject.

In his novel computer game, Persuasion Invasion, solo players encounter pacifist alien invaders that don't conquer through war, but instead sow discord and division. When the community can't agree on small issues, the aliens strike. Players assume the role of government agents who must unite communities.

The game aims to provide students with a better understanding of the values that shape both their own beliefs and those of others, with opportunities to practice overcoming bias. "It is not about finding middle ground, changing beliefs or confusing civility with politeness. It's about finding common ground based on shared values," Diana said.

During gameplay, players must choose the most persuasive argument for a particular computer-generated character. If the human player is biased, they'll select the argument that aligns with their own values rather than the other player's.

Before gameplay, players take the Moral Foundations Theory Questionnaire, which rates how much a player values things like fairness, loyalty and empathy. With an estimate of each players' values, the game can infer their beliefs. It also uses machine learning and natural language processing to evaluate the values displayed in the text of each argument, and can predict which options will appeal most to players. "This allows instruction to adapt to player values. We can remind players that 'this option might be most appealing to you, but remember you're trying to appeal to the other person."

To help understand the other characters, players can use tools such as "Social Media Snoop," which allows them to see that character's most recent status. "Conversation Reset" lets players step back to a point of agreement and try again.

"Games are effective because they are immersive, and individual play may reduce the negative effects of social pressure or shyness," Diana said. "Players are free from social consequences and social influence. They can practice in a safe environment where they're not afraid to say the wrong thing, which builds confidence."

The researchers deployed Persuasion Invasion in a study with high school social studies and English classes. More than a quarter of students continued to play outside class, and 82% thought it was an effective way to practice what they learned. Data showed that students improved their abilities to reduce tribalism and identify values. By defining and naming discourse moves, the skills became highly transferable.

"Students said that they used these techniques on their parents, and they appreciated that they could really apply what they learned to their own lives," he said.

Diana said he'd like to explore extending the game beyond high school students, and that it may be useful for all ages to play. "Beyond direct applications in civic technology, I believe this new kind of value-adaptive instruction also has implications for any system designed to mitigate bias or augment human reasoning."