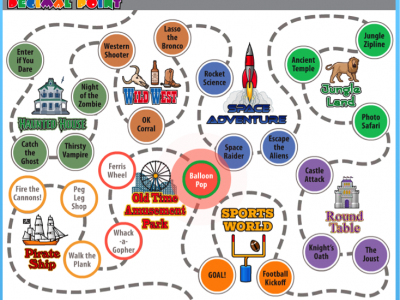 When it comes to learning math, how much fun you are having is rarely factored into the equation. That isn't to say that game designers have not tried to turn instruction into more engaging material. For instance, there are plenty of educational games on the shelves; unfortunately, very few of them have been shown, through empirical research, to lead to improved learning outcomes, particularly in mathematics. Thanks to a team of researchers from the Human-Computer Interaction Institute (HCII), this is changing. The team, including HCII faculty Jodi Forlizzi and Bruce McLaren, are about to publish data from a two-year NSF project that shows math really can be fun…and having fun can help you learn.

Can a Game Help You Learn Decimals?

"To create this game, we first led a series of co-design events with middle school students," said Forlizzi of the game design process. "Our goal was to find a game metaphor that was engaging, and our students helped us generate many ideas about potential games and design features.”

The team ultimately designed the game using an amusement park metaphor. Users of the game travel sequentially to different theme areas (think the “Wild, Wild West” and “Space Adventure”) playing a variety of mini-games within each area. The mini-games target different decimal misconceptions. For example, the "Balloon Pop!" mini-game in the “Old-Time Amusement Park” theme area asks students to toss darts at decimal-labeled balloons in order of smallest to largest. While throwing a virtual dart at a balloon is fun, ordering decimals can be a challenging task for students, who often incorrectly believe that longer decimals are larger than shorter decimals (e.g., 0.1921 > 0.2.)

The subject matter, decimals, was chosen because of its fundamental importance to mathematics, but also because it is an area ripe with common misconceptions. The research team designed Decimal Point to test whether educational games can motivate middle school students and whether learning through an educational game could help students better learn decimals compared to more conventional (non-game) instructional approaches.

Decimal Point was tested with a group of two hundred and fifteen middle school students. The students were divided into two groups; one group of students learned using Decimal Point and the other learned using a conventional, computer-based method. The primary question was whether or not Decimal Point would lead to better learning outcomes compared to non-game learning. In addition to this question, the researchers wanted to understand whether or not students enjoyed learning more in the game format, whether they made more errors while using the conventional (and presumably less engaging) approach, and if it took longer to complete a lesson when playing Decimal Point than the non-game format. Finally, researchers were hoping to understand if students who played Decimal Point gained more confidence in their decimal knowledge.

"In reviewing past research, we were surprised that scientific studies had not yet demonstrated students could learn mathematics with games.  Given the motivational factor, the fact that kids love to play computer-based games, we were convinced that games could be used for learning math," said McLaren of the idea behind Decimal Point.

After analyzing the data and findings from the project, their answer is a resounding “Yes!” - educational games can help students learn.

Students in both the game group and the non-game group completed a test of decimal skills before using the instructional materials. Students also took two posttests, one directly following the completion of the courses and a delayed test one week later.

A key result was the following:  Students who had lower prior knowledge of decimals when beginning the course benefited the most from Decimal Point.  This result in particular has Forlizzi and McLaren very optimistic about the possibilities for Decimal Point and the future of educational games. With the success of their study with Decimal Point, it is their hope that game designers and educational technologists will continue to explore the power of educational games in learning mathematics.

Learn more about this project with the HCII.