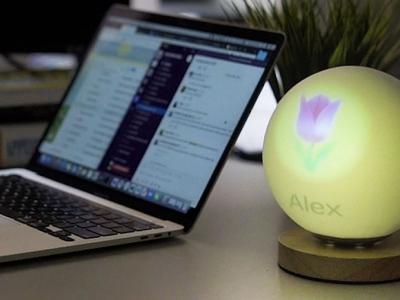 Thanking co-workers through Slack or Teams is a nice gesture, but it doesn't measure up to saying it to them in person. But remote work has cut into the time employees spend together, making the pat on the back, hand shake or sincere "thank you" less commonplace.

A group of students in the School of Computer Science's Human-Computer Interaction Institute (HCII) sought to recreate the feeling of in-person kudos that can get lost in remote work environments through Co-Orb, a spherical desk lamp that lights up when a user receives a nice message via platforms like Slack or Teams. The project won the team first place in the Student Design Competition, which focused on gratitude, at the international ACM CHI Conference on Human Factors in Computing Systems earlier this year.

"You spend a lot of time with your coworkers, but you probably don't take enough time to say thank you to them, which is important in building a healthy working relationship," said Lorry Tang, a student in the Master in Human-Computer Interaction (MHCI) program and member of the design team. "We found that a lot of people want to receive more gratitude from their co-workers, so we set out to find a solution that not only makes people happier in their work life, but can also help the overall organization have a healthier environment for everyone."

Co-Orb uses natural language processing to pick out keywords like "thank you," "appreciate" and "your help" in messages. It then prompts the sender and asks if they would like to send a thank you to their co-worker's Co-Orb. The message is sent to the recipient's lamp, which lights up with a personalized emoji and the name of the sender. The recipient can then touch the Co-Orb to hear the message read out loud.

"We really wanted to present something more than a screen-based media," said Yufeng Zhao, also an MHCI student and member of the team.

In the workplace, gratitude increases job satisfaction, fosters team learning and improves group well-being, according to the team's research. However, gratitude doesn't always come across through thank you notes. Instead, more subtle interactions, such as offering someone a cup of coffee or taking them to lunch, are personalized, timely and specific ways to express thanks. These interactions are no longer an option during remote work scenarios.

"If you had a huge project, and you want to say thank you to people, usually you will find an event or occasion to say that in person," Tang said. "What we realized with our research is that people don't always get the chance to say the small thank yous, to really express their appreciation."

When deciding how to communicate these thanks, the team considered the principles of calm technology, which include communicating information without taking the user out of their environment or task. They incorporated a lamp into their design since it's a commonplace office fixture.

"People are still in a working environment, so it's critical they can stay focused," said Miley Hu, another MHCI student on the team. "People want something that's easy, that's effortless, but also not distracting them."

In a small way, touching the orb and listening to it speak makes the connection with the sender more tangible, Tang said.

After testing, the team found that people preferred something personalized — leading the team to add an emoji — and also made the gratitude messages collectible, so the recipient can refer to them later.

"I love seeing the emojis," one tester said.

"That's actually really nice, I would probably buy that," another said.

"We're using that physical representation of gratitude. When you see something, then you touch it and it speaks to you, that gives you a different type of feeling," Tang said. "It's like you're connecting with someone instead of just reading messages."