We've become accustomed to our smartwatches and smartphones sensing what our bodies are doing, be it walking, driving or sleeping. But what about our hands? It turns out that smartwatches, with a few tweaks, can detect a surprising number of things your hands are doing.

Carnegie Mellon University researchers have used computationally controlled knitting machines to create plush toys and other knitted objects that are actuated by tendons. It's an approach they say might someday be used to cost-effectively make soft robots and wearable technologies.

The Morphing Matter Lab from the Human-Computer Interaction Institute at Carnegie Mellon University is presenting five papers at CHI 2019.

Thousands of the world’s top researchers, scientists, and designers are traveling to the ACM CHI Conference on Human Factors in Computing Systems (also known as CHI) this weekend. The premier international conference of Human-Computer Interaction will take place in Glasgow, UK from May 4-9, 2019.

A group of masters students recently traveled to Lawrenceville to present a large check to the Children’s Hospital of Pittsburgh Foundation, a symbol of their successful fundraising efforts last semester. 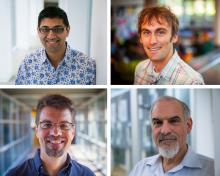 Google seeks to identify and strengthen long-term collaborative relationships with world-class computer science faculty researchers in areas of mutual interest. The goal of these collaborations is to impact how future generations use technology. 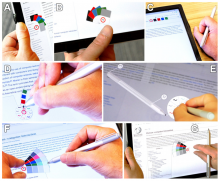 What is this idea of posture-aware tablet interaction, as mentioned in the paper title, and why is it novel? 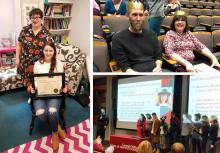 According to the Founders Day website, the event ”Is a time for sharing our collective efforts, recognizing the good work of faculty and staff, as well as looking towards the future of SCS.”

A pair of separate, but complementary, research projects led by Carnegie Mellon University will use cutting-edge research in motivation, thinking, culturally affirming teaching and human-computer interaction to galvanize a community of teachers, mentors and parents around improving math achievement. These projects aim to support schools that serve black, Latinx and low-income students, and are supported by the Chan Zuckerberg Initiative and the Bill & Melinda Gates Foundation.

Carnegie Mellon University students, faculty and alumni will be among the thousands descending onto Austin, Texas, for South by Southwest (SXSW) March 8-17, 2019.

Two faculty from the Human-Computer Interaction Institute will be speaking during separate sessions on Tuesday, March 12.