One of the oldest, most versatile and inexpensive of materials — paper — seemingly springs to life, bending, folding or flattening itself, by means of a low-cost actuation technology developed at Carnegie Mellon University's Human-Computer Interaction Institute. 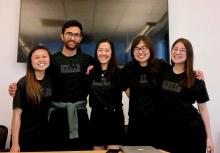 Aesha Shah had been working at the startup Resy for about a year, so the timing seemed right when she saw Professor Bob Kraut’s email seeking capstone sponsors. Having completed an HCI capstone with Kraut as her advisor during her own undergraduate days at Carnegie Mellon University, she was familiar with the rigor involved with the project. 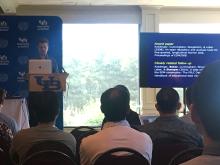 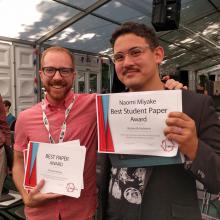 Many experts from the learning sciences and educational technologies communities gathered at the University College London (UCL) Institute of Education in London last week for not one but three conferences during the London Festival of Learning. 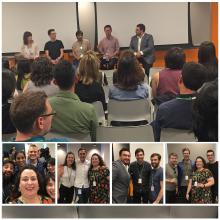 Less than 48 hours after going online, the tickets were gone.

The tickets -- not for a concert, Broadway show or cross-town rivalry sporting event -- were for our Human-Computer Interaction Institute alumni networking event on Thursday, June 14, 2018, at Facebook, Inc. 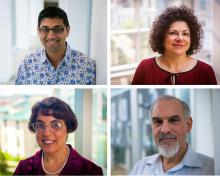 Selected from more than one thousand proposals, four faculty members from the Human-Computer Interaction Institute have received 2017 Google Faculty Research Awards. Google hopes these collaborative relationships with world-class computer science faculty researchers will impact how future generations use technology, benefiting both the researchers and Google.

Louise Zhou, who graduated last year with a double major in business administration and human-computer interaction, is one of five Carnegie Mellon University recipients of Fulbright Awards for overseas studies.

Greg Coticchia, the executive director of Carnegie Mellon University’s new Master of Science in Product Management program, recently discussed the joint program between the School of Computer Science and the Tepper School of Business. 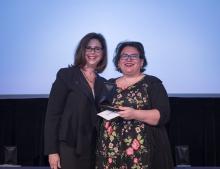 Jessica Hammer, assistant professor at Carnegie Mellon University, jointly appointed in the Human-Computer Interaction Institute (HCII) and the Entertainment Technology Center (ETC), has received the 2018 award for Teaching Innovation. All university award winners were recognized at the Celebration of Education awards ceremony and reception on Monday, April 30, 2018.